[An article by military historian, Patrick Bishop,  first published in the Sunday Telegraph on 1st November 2013]

Donald MacDonald grew up speaking Gaelic on the remote Hebridean island of South Uist knowing nothing of Britain. Yet when the guns of August 1914 began to boom he lied about his age to fight for an empire to which he felt no real ties of loyalty or kinship. He served from the first days of the war to the last, and was wounded three times. 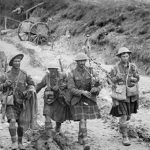 MacDonald left behind a wonderfully-observed account of the experience of war, seen through the eyes of a man who had a full measure of the human qualities found in the inhabitants of the Scottish highlands and islands. He was proud, independent, hard-working and incredibly tough. The lofty sentiments that politicians and generals invoked to justify the slaughter are nowhere to be found  on his lips, or those of his comrades. The closest he comes to offering a motivation is when, while his regiment was briefly stationed in Dublin he went to Mass and was accosted afterwards by some of the congregation. ‘They asked where I had come from. When I said South Uist, they said: “That is a Catholic island. Why are you fighting for England?” I said that I was in the war for Scotland.’ It was the spirit of adventure, though, that first drove young Donald on. In 1913, aged fifteen he run away to join the Cameron Highlanders. He was released after six months and went to sea but when he learned of the outbreak of war returned to the regiment and was disappointed when he was not in the first drafts to be sent to France. He eventually left Inverness for the front in September, aged sixteen years and eight months.  ‘The journey to Southampton was long and weary. When we stopped at any station for food, we were cheered by crowds waving small flags and handkerchiefs. One young girl shouted “kill all the bastards, they have killed my brother”. Someone replied “that’s what we intend to do”.  At Le Havre French girls snipped pieces off their kilts.

In mid-October he was caught up in the battle around La Bassée as the German and British armies raced each other to the Channel. In a lull in the fighting he and a friend from Lewis, Angus MacDonald, were ordered into no-mans land to watch for an enemy attack. While waiting to be relieved they refreshed themselves from a canteen filled with rum.  ‘We started drinking. It was the strongest and best rum I ever tasted and it soon began to take effect. We took our packs off and sat on them. After a while Angus said “do you know this song Donald?” and began to sing at the top of his voice ‘Leaving Stornoway Pier’. I joined in, the noise we were making was giving our position away to the enemy. I distinctly heard the order at the back of us for two men to go out there and have us shot for being drunk and giving the position away to the enemy.  I sobered up as if a bucket of ice water were thrown over me…. I said “come on Angus, let’s get out of here”.’ They rejoined their comrades and escaped punishment.

The next dawn the Camerons attacked the German lines. ‘A’ Company was in the lead supported by ‘B’ Company to which McDonald belonged. The first enemy trench was occupied without a fight. There was no room in it for ‘B’ Company who returned to the start line. ‘ We were settling down there when there was a huge explosion in the trench and all of A Company was blown sky high,’ he wrote. ‘The Germans had left the trench mined. The awful sight is still in my mind and when everything came down, the bushes and hedges were covered with pieces of khaki and tartan kilts.’ Then the shelling started. Angus was hit in the arm and as Donald was bandaging it they were joined by a stretcher bearer who told him he had been wounded too. ‘ I looked and there was the calf of my right leg blown off. I remember it was funny seeing the diamond hose top with a chunk of flesh sticking to it lying on my shoe.’
Once recovered he returned to the regimental headquarters at Invergordon where his name immediately came up to join the next draft to France. There were no volunteers any more. ‘Gone were the days when they only had to blow the bugle and the whole camp fell in for a draft.  The wounded, as they came back, told their own story…’ Donald had a temporary reprieve when it was discovered he was not yet eighteen. But soon after his birthday he was back again, fighting in the Battle of the Somme. He would stay on to the bitter end being badly wounded on two more occasions only to be returned to the front line once he was fit for duty.

Despite the appalling danger and hardships and the vileness of trench life Donald never shirked his duty even though he had no belief in the virtue of the fight. ‘Almost everything is mean and rotten in war but those responsible in the first place bear the blame,’ he said. When it came to an end it took a full day for the news to reach the front lines. On the night of 11 November he was trying to sleep when he heard bagpipes playing. ‘Someone said: “Why did he get the rum? Maybe they are giving some for this battle tomorrow.” Then we made out there was more than one piper. With only my tunic on, I dived for the stairs and the road in front. It was packed with troops, shouting, singing and yelling. I asked a chap what was it all about?  He did not know, he was just following the crowd. I saw an Officer that I knew. I asked him, he said “Don’t you know?” “No Sir.” “Well boy, the war is over.” The moonlit night was calm and we walked, sang and yelled as an uncontrolled mob behind the pipers.’

Despite the horror he had witnessed, Donald’s optimism somehow survived.  He wrote: ‘In a heavy bombardment with death and desolation around you, your heart pounding like a piston, thinking the next shell would be yours, you thought the end of the world had come and when the shelling stopped, the brave little skylark rose high above us with her sweet song of hope and courage, you felt there is a God.’