Donald MacDonald, “Dòmhnall Ghilleasbuig Sorcha”, was born on 2 February 1897 on the remote Hebridean island of South Uist. He was one of 10 children from a humble crofting and fishing background.  The house where he was born and raised was typical of its time, a basic thatched cottage, constantly in need of repair.  Several of his brothers and sisters died at an early age and his mother died when the family were quite young, leaving his older sister to take over the running of the household and keep the family together. 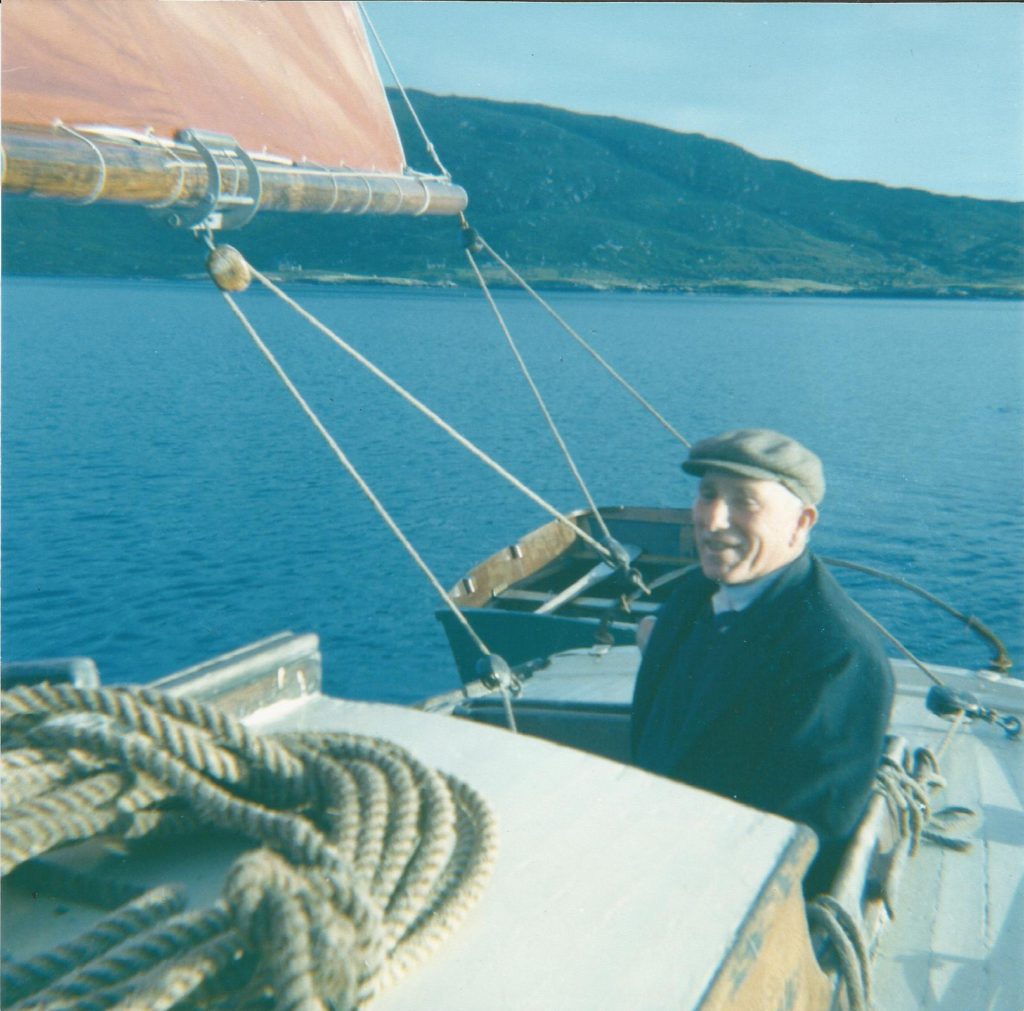 His childhood days were spent in the township of South Lochboisdale where Margaret Fay Shaw spent several years learning and recording their songs and culture.  Donald knew most of the characters referred to in her book ‘Folksongs and Folklore of South Uist’.

He tells the story of his life from his earliest recollections, remarkable, because of his facility of total recall of conversations and details of situations.  It is a very human story told with complete unselfconsciousness and lack of pretentiousness. His memoirs reflect authentic old themes in an honest and original way, his Uist childhood is fascinating and can be looked upon as a contribution to the social history of the island. The varied experiences of his long life are absorbing.  He tells of his early days in a subsistence crofting/fishing community at the turn of the century, of joining the army reserve under age, of his spell in the merchant navy and subsequently his service all through the 1914-18 war, when he was three times wounded.  His account of the Battle of the Somme gives an insight into the horrendous conditions involved.  He served from the first days of the war to the last and his account reflects him as being proud and incredibly resilient albeit with a touch of “a likeable rogue” given some of his documented exploits. His anecdotes tell tales of real men trying to cope with the brutality of war. He leaves behind an honest, personal and somewhat different account of the experiences of war seen through the eyes of a shrewd and resourceful observer.

After the war and following his return to his native isle, he was accepted on a scheme to train and employ ex servicemen, many of whom were disabled, as ‘Diamond Cutters’ within the Bernard Oppenheimer Diamond Works (National Diamond Factories Ltd) a branch of which opened in Fort William, the workforce having being referred by the Ministry of Labour.  The factory unfortunately closed down one month before the completion of his training but he was offered a transfer to one of the company’s English factories, which he declined. He was however given a certificate showing him to be a fully trained diamond cutter together with a reference.

At that time the Canadian authorities were advertising emigration to Canada which he accepted and in 1922 he set sail on the ‘Metagama’ a ship best known for conveying emigrants to Canada. He became involved in farm labouring, which he did not enjoy and eventually decided to move on with subsequent entry into the USA where he worked in the motor industry, interspersed with periods sailing on the Great Lakes.  Thereafter he speaks of the lack of work due to the depression, his return to South Uist on holiday during 1936 and the circumstances that prevented him from returning to the United States.

He remained in South Uist until the outbreak of the Second World War when he returned to the merchant navy for the first year of the war, thereafter coming ashore to work as a rigger in the Clyde shipyards.  Back in Uist, he tells of being able to salvage sufficient timber from flotsam to build his house in Locheynort and also to ‘salvage’ some whisky from the SS Politician with less lasting benefit; of marrying and setting up house in Locheynort in appalling conditions of isolation, on very poor land whose only appeal was that his great-grandfather had lived there prior to clearance to an even less attractive area.  No sooner had conditions been improved by road access than his wife died, leaving him to bring up, practically unaided, five of their six children, all below the age of ten.

During the early 1960s, Sir Walter and Lady Pollen, friends of Donald who were frequent visitors to Locheynort, encouraged him to put pen to paper to document his varied and interesting life. Such an undertaking took several years to commence by which time Donald was in his early 80s.  His handwritten manuscript was completed over a period of several years and was subsequently typed by Patricia Pollen, the daughter in law of Sir Walter and Lady Pollen.  Donald died peacefully in 1985 at the age of 88 years.

The manuscript remained with Donald’s daughter who made numerous approaches to various publishers but without success mainly due to the size and complexity of the document in pre-computer days, but with the passage of time and the resulting availability of modern facilities the manuscript was eventually digitised which vastly simplified the editing process and that, coupled with the centenary of the commencement of the First World War, made the manuscript more attractive to publishers.

Donald was 57 years of age when his wife died leaving behind six children, the youngest being 6 months. Apart from the baby, he brought up all the children single handedly with virtually no help from the state despite his involvement in two world wars. The baby was raised by an aunt, thereby remaining in close contact with the family, while another aunt helped briefly with the upbringing of the two youngest children. There is no doubt the family would have been split and sent to children’s homes had they lived on the mainland.

It has been the wish of the family that their father’s story should be maintained in its entirety in his memory given that he held the family together following the death of his wife, their mother, as did his older sister when his mother died.

Throughout his memoirs, all aspects of his life are illustrated through the medium of his stories and adventures from all over the world through which he demonstrates the hopes and aspirations of an ordinary man looking back over a more than full life.